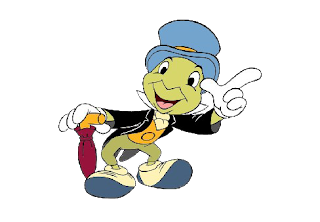 As a child, I was introduced to Jiminy Cricket, the wee fellow
who was the conscience of Pinnochio in the Walt Disney film.
It was his job to keep Pinnochio in line.  Crickets were common
on our farm, and their reverberations a familiar part of the night
chorus, along with locusts, tree frogs, lowing of cattle, the occasional
crow of a rooster, and  were sometimes joined by the hoot of the
owl in the old oak tree.  Pleasant sounds all, UNLESS a single
cricket found his way into the house and commenced his repetitive,
plaintive, maddening chorus.  Mother would reach for her broom
and proceed to try to ferret out his hiding spot.  On occasion the
whole family, driven half mad by his sound, would engage in the
hunt.  I wish I could say when we found him we escorted him
outside to join his cohorts, but alas his fate was usually sealed by
a good, swift pounce of mother’s broom, and her sigh of satisfaction
as silence reigned once again.  The sound of a cricket conjures
childhood memories for me of Jiminy, the charming cricket,
and mother’s remorseless broom!