Good tidings to all, and a short rhyme.  Submitted to Poets and Storytellers United, 12-23-21.

Strange things befell me on the

way to Christmas.  Seems I slipped a

cog along the way.

Had an “absence” spell and hospital

visit just when I had planned no life delay.

.Learned again to take no day for granted.

Each is a gift to treasure, come what may.

Here I am to say happy holidays.  I’ve come

to rhyme another day

Poetics Tuesday, and Merril has challenged us to consider "passions stamped on lifeless things". Since the beginning of time, men have attempted to leave their stories for those yet to come, and many of those stories have remained undiscernible and objects of intense study.  Submitted to dVerse, 12/8/21. 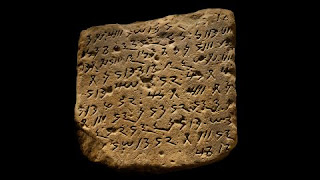 Beyond the dark of night and above the clouds, where brave men rode their man-made
steeds across the Milky Way to leave their footprints on our shining harvest moon,
lies a vast nothingness that has captured man's curiosity for eons upon eons.  Ancient
hieroglyphs in distant caves speak of space beings and flying objects and a strange
menagerie called Nazca lines scripted in the sands of some distant land , discernible
only from high above, keep their purpose secret, ever eluding us.
In caves and buried cities,  cliff dwellings and civilizations beneath our oceans,
vanished men have left messages in pictographs, mystic marks and hieryglyphs,
the penmanship of their time.  There are those who spend their lives attempting to
decipher those stories yet to be revealed.
Likewise, we write the stories of our time for some distant progeny to
attempt to decipher.
Posted by indybev at 11:43 AM 11 comments:

TROUBLE AT THE NORTH POLE

Ah, secondary characters!  None more put-upon than Mrs. Claus.  Santa gets all the accolades, and she's left to handle details.  This occasioned me to reprise an old poem I wrote some time ago.  Like the original, I like to think it's worth the read every Christmastime. Ir's a little risque, so I hope I don't offend anyone!  Here's Mrs. Claus' story. Submitted to Poets & Storytellers United, Deember 4, 2021.

TROUBLE AT THE NORTH  POLE

‘Tis the night before Christmas, I’ve just cleaned the house

Now I find Santa’s been drinking, the louse

He’s been into that bottle of Christmas cheer

I’ve been using for cooking since some time last year.

So, now the sleigh’s loaded (and so is he)

There’s nobody left to drive but me

There’s no place to sit except on his lap

Well, giddyup Prancer, and Blitzen too

We’ve got an important job to do.

Just fly high and fast as in days of yore

We’ll go really fast, so they don’t hear him snore.

We’ll deliver these toys with all possible class

In spite of this tanked-up irresponsible ass.

Who’d have thought when I married my handsome prince

He’d turn into the bum I’ve been living with since.

Rudolph, I thought I could count on you

Oh, how will I travel this highway of stars

I’ m only one woman, but can’t you see

All the boys and girls are counting on me?

Well, here we go fellas, it’s a leap of faith

Pretend you’re up and it’s the last of the eighth.

I knew we could do it, I just love you guys

In spite of our troubles, you were wonderfully wise

The toys are delivered, we’re almost back

With this besotted tippler, and an empty sack.

With MERRY CHRISTMAS TO ALL, TO ALL A GOOD NIGHT

We rose to the occasion and we did it all right.

Not tonight, Santa, I have a headache.