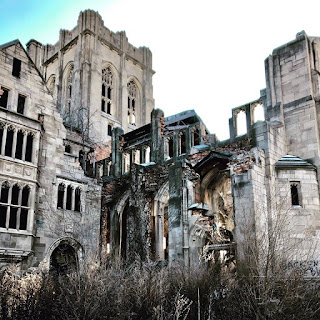 Quadrille Monday at dVerse
Whimsygizmo has chosen “change”for the featured word.
My daughter and granddaughter recently took a photographic
tour of Gary, Indiana.  Change dealt a cruel hand to Gary.
As its steels mills closed, its workers fled.  It’s once opulent
downtown (City Methodist Church pictured here) is a ghost
town with once gleaming buildings abandoned and in shambles.
It conjures an overwhelming feeling of sadness, and the
realization of the fragility of man and his efforts.
Submitted to dVerse
January 14, 2019
******************