WHO GIVES A HOOT

Owl is the word for our Midweek Motif
For some reason Edward Lear's "Owl and
the Pussycat" came to mind, and I had a
bit of fun with it.
Submitted to Poets United
October 10, 2018 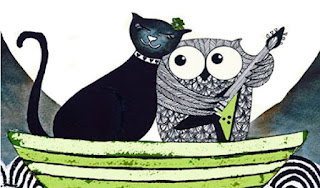 ********************************
The owl and the pussycat, so it’s said
Set sail in a pea green boat
Their travel as told from there to here
Was surely hallucinated by Edward Lear
What wild fantasies were in his head
To think this odd couple should wish to wed
Pussycat is featherless despite all her prowess
And everyone knows the owl is meowless
Nonetheless, they set sail in search of a ring
Which they found on a pig, imagine that thing
From hereon the tale gets even more murky
Seems they were wed on a hill by a turkey
And after a repast of quince and mince
They danced in the sand forthwith and hence
Fur to feather they waltzed by the light of the moon
But alas it all ended quite too soon
The owl discovered his bride couldn’t fly
And pussycat asked herself Why oh Why
They divorced, I heard, on a coral reef
Thankful their adventure was mercifully brief.
They had no band to play, no horn to toot
“Cause an owl can’t meow and a pussycat can’t hoot.
*****************
Posted by indybev at 2:24 PM