We are asked to write of a memento with special meaning.
I guess this could be called prose poetry.  At any rate,
it is a memento story that begs to be told.
Submitted to dVerse Poets Pub  and
to Poets United Poetry Pantry
February 2017
*************** 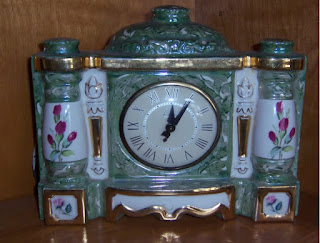 It was autumn in middle Illinois, and the ears of corn hung heavy on the stalks.  The oaks were beginning to show tinges of reds and golds, and at the edge of the little town near our farm, a traveling carnival set up shop in the empty field.  There were ticky-tacky rides, and booths of chance, and the inevitable fortune teller.  Like other farm families, my parents ambled from booth to booth with me in tow, looking for diversion and an evening of fun.

We stopped at one booth that appealed to my mother.  If a tossed coin lit in a dish, you won the dish.  A couple of tosses and she won a carnival glass candy dish which pleased her no end.   We moved on to a booth with a mechanical row of little ducks moving across a track, and a row of cork-shooting guns.  A dollar bought 5 shots, and if those shots knocked down five ducks a prize was yours.  My father was taken with a gaudy carnival clock, and was determined to win it for my mother.  Five shots.  Four ducks.  Another dollar changed hands.  Five shots.  Three ducks.  Another dollar changed hands.  Determined, my father soldiered on.  My mother, a frugal soul, begged him to give up, but Dad was a man with a mission.  I was a child, so I don’t remember how many dollars changed hands, but at last, to mother’s immense relief, five ducks fell, and the clock belonged to Dad.   Once home, the clock had a special place on the shelf in the kitchen.  Never mind it was a mantel clock, gold-edged and gaudy.  Dad was a happy man.

Over the next 45 years, the clock marked the hours and minutes in their lives.  I left home, married and had children.  Mom and Dad moved 3 more times, and each time the clock went with.  It marked the hours when they sold the farm and moved to town, when Dad passed, and when Mom lost her battle with Alzheimer’s and moved to a safe place.   When Mom slept away and treasures were divided, the clock came to me.  It sits on a shelf in my den.  The cord is the same cord my father spliced and wrapped with electrical tape.  It still shows the white paint from some redecorating project.  Now it marks the hours and minutes of my life.   God willing, it will mark the hours and minutes of the lives of one of my children when I am gone.   I’m sure somewhere Dad is smiling, chucking Mom under her chin with a wink in the way he had, and reminding her he got his money’s worth after all.