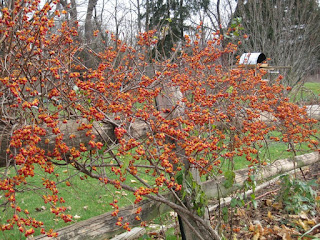 While to most of us bittersweet means a melding of pain and pleasure, in the hills of Brown County in southern Indiana, home to the author, James Alexander Thom, and the singer, John Mellencamp, a vine called bittersweet can be found growing along the fences of the rambling rural roads.   Named bittersweet because, on the one hand, it is quite invasive and has been known to kill trees by wrapping around them so tightly the trees are strangled (called girdling by arborists); yet on the other hand during the Fall season the deep yellow of the berries bursts to reveal an orange jewel, while the foliage changes to a beautiful yellow and fencerows adorned with bittersweet become glorious to see.   Beloved by the residents of the area, it is often used for making autumn wreaths and decorations.   Vermont folklore tells us it was believed the root of the bittersweet provided protection against evil witches and malevolent magic.   Perhaps so.  Brown County is known for its log cabins and rural atmosphere, and it is difficult to believe malevolent magic lurks in those beautiful hills.