Given today's political chaos and the behavior of our White House resident, make me want to employ a powerful tool of my childhood, which I dubbed My Mighty Peckinstick.  It needs an explanation, I'm sure, so here you are. 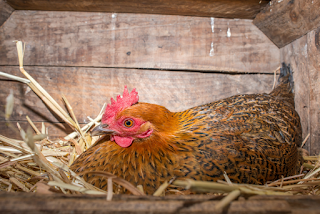 Growing up on a farm you learn to help out at an early age.  Farm animals need to be tended morning and night, and this is called “doin’ the chores”.   When I was fairly young, my chore was gathering the eggs.  When you’re a child, you simply parrot phrases you hear your parents say, so, using my mother’s southern Illinois twang, I called my chore “pickenup aigs”.  Walking into a hen house of a couple hundred hens is a fairly intimidating thing.  Toting the wire egg basket, the long row of nests looked endless to my child’s eyes.  Most were empty, but there were always a couple with resident hens.  These were of two types---the cackling hen who’d fly off in a flurry of feathers when I approached, and the other a formidable foe.  She had no intention of giving up her nest and she’d greet my approach with an evil eye, some threatening clucks and a sharp peck on the wrist if I reached under her for the eggs.  I devised a counter-attack for the clucking hens.  I found a stick about a foot long and dubbed it my peckinstick.  I’d give the hen a gentle nudge to see if she were the pecking type.  If so, I’d hold her head down with my mighty peckinstick, rendering her unable to peck me while I reached under her for the eggs.

Many years have passed.  I’ve learned proper grammar and proper use of the King’s English.  There have been times through the years, however, when I’ve encountered people who’ve been sharp and hurtful.  I smile to myself and think they wouldn’t have caught me so unaware if I’d been armed with my mighty “peckinstick”.