It's Writers' Pantry #66.  On any given night in the shady areas of most cities, lonely hearts gather at a neighborhood pub seeking solace in a bottle and companionship on a barstoool.   Submitted to Poets & Storytellers United, April 18, 2021. 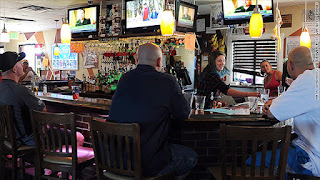 LONELY HEARTS CLUB
It’s the usual cast of characters
At the corner pub happy hour
Familiar faces tell the same old stories
Over a beer or a whiskey sour
Joe the bartender has heard it all
He’s heard it again and  again
He listens and nods in agreement
About what’s saintly and what’s a sin
It’s the gathering of the lonely hearts
Engaged in the mating game
Hoping for companionship
And someone to remember their name
When happy hour has ended…
Comes the time they can’t postpone
It’s soon to be the lonely hour
And they don‘t want to go home alone..