Creepies and Crawlies are the topic at Tuesday Poetics/  I recall the legend of the moth-become-man who terrorized the residents of Point Pleasant, West Virginia.  Submitted to dVerse, September 14, 2021 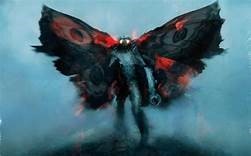 They call me Mothman in Point Pleasant.

West Virginia.  Sighted by many and widely

reported, the residents feared me for my

though I walked upright.  Many times I was

sighted over the span of a year, but no one

was ever harmed.   My fame was such that

a movie was made starring Richard Gere,

If you doubt my word, just talk with someone