Haibun Monday at dVerse, and Frank has asked us to feature the eagle.  I recently came across the story of drone versus eagle which may be of interest,   Here's my recount of the tale.  Submitted February 1, 2021  The photo was taken by my daughter in Ankenny National Wildlife Refuge in Salem, Oregon. 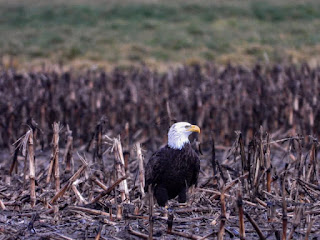 Erosion has been a serious problem on Michigan's Upper Peninsula.  The Michigan Department of Environment, Great Lakes, and Energy (known as EGLE) determined to use a drone for mapping shoreline erosion near Escanaba to document and help communities cope with high water levels.

The mapping began, with environmental analyst Hunter King monitoring progress.  About seven minutes into the flight, reception became spotty and the drone began to twirl.  It sent 27 warning messages, one oF which was that it was missing a propeller, before it splashed down into the cold waters of the lake.   The mystery of its demise was solved by two birdwatchers nearby who saw the drone attacked by an American eagle before it spiraled into the lake, and the eagle soared away, apparently unharmed.

The EGLE drone team is considering how to change the drone's appearance so that it does not resemble a seagull, and the eagle, no doubt, is wondering exactly what manner of seagull it was he encountered!

where the eagle rules