The Sunday Muse #151.  Isn't that just like a man?  Just as we're approaching summer, he's leaping back into winter.   I considered some Photoshop chicanery to get him headed in the right direction, but then decided he deserved whatever he got!  Submitted March 13, 2021 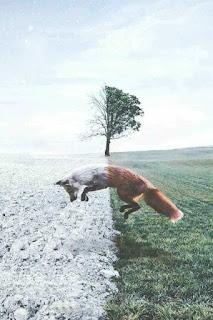 ah, the folly of foxy fellows

she succumbed to his devilish charm

believing their love would last forever

but summer waned,  and so did he

with scarcely the flash of his magnificent tail

he leaped off in a cloud of good intentions.....

to find himself, he promised

but she and the kits knew

himself was ever a liaison away