Time for Midweek Motif at Poets United
and we’re asked to feature the word Flood.
Submitted to Midweek Motif
August 16, 2017 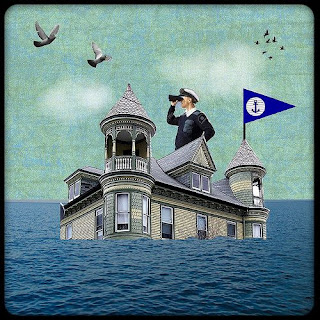 When I was a child, there was a burbling little creek a mile or so from our farm.  It was  the kind of stream that meandered through the meadows, shallow enough that one could wade across it at any point.  But, in the Spring heavy rains, it became a raging torrent, quickly rising beyond its banks, flooding fields and galloping on its way south, where it eventually emptied into the Mississippi River and thence into the Gulf of Mexico and ultimately into the Atlantic Ocean.   Someone once wrote “All the waters of the world are one”, and so I think perhaps a flooding rain drains from the fields into the ditches, into the rivulets, into the streams, into the creeks and into the rivers, then rushes to the ocean, where moisture is drawn up into the clouds until their fat bellies are filled with rain and the cycle repeats itself.  The power of floods is the stuff of legends.  Many years ago, when working on family history, I discovered that the cemetery where many of my ancestors were buried was swept away by massive flooding of the Mississippi.   They were hardy pioneers who made their way from Virginia to Kentucky and into Indiana.  Strange to think that, dressed in their funeral finery, they took yet another journey to heaven knows where.