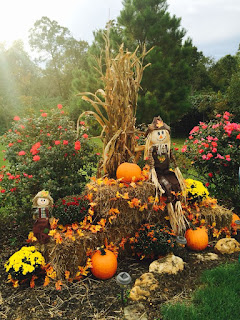 James Whitcomb Riley said it best … “When the frost
is on the ‘punkin’ and the fodder’s in the shock”.
Autumn is a kaleidoscope of  memories for me.
It was my mother’s favorite time of year, and she
loved to arrange a Fall display by the yard gate.
First she’d bring corn stalks from the field and
fashion them into a shock, then harvest her Indian
corn, pumpkins, and colorful gourds  to gather
about it.  A bale  of straw became a seat for the
scarecrow she fashioned from my father’s old
overalls.   If we were lucky, we had a few weeks
to enjoy the display before that first night when
the temperature plunged and we woke to
sun-sparkled frost crystals.  It was a magic time
of  harvest, hayrides, wiener roasts, apple barns,
burning leaves and the honking of geese overhead.
In memory still, I breathe in the pure, crisp air of home.
***************
Fodder in the shock
Jack Frost can’t be far behind
Winter’s harbinger