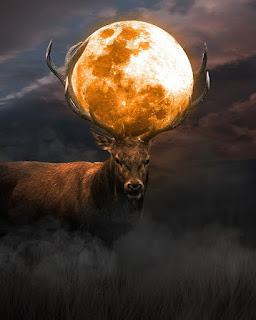 She saw him there in the copse
tall and proud, arrogant and egotistic
Isn’t that just like him, she thought,
to think he holds the world in his antlers.

She had fallen for him once
when she was young and naïve
but now she could have any buck in the forest
and she was wise to his duplicitous ways.
He was always looking for a new, young face
and once he’d conquered them
he bounded off looking for newer and younger.


Now his reputation was tarnished, and
all the does regarded him with nothing but disdain.
Once he was a much desired young buck;
now he was just a ragged old has-been
with a pair of tattered antlers.