VOYAGE OF THE MARY KATHERINE

Sarah enchanted us with a recount of
her narrowboat trip, and challenged
us to set sail in poem.  I'm a total
landlubber with a fascination for tales
of the sea and her mysteries.  This
poem is loosely based on an actual
ocean mystery.
Submitted to dVerse
August 11, 2020
************** 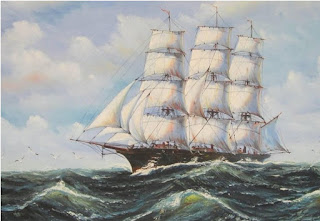 In 1870 on a summer’s day
set sail a brigantine
its cargo destined for a distant port
she was known as the Mary Katherine
All was well as the ship set sail
skidding the bounding main
but captain and crew, so the story is told
were never to be seen again
Aye, the ship was seen, a phantom ship
in quite an abandoned state
When she was boarded there was no clue
as to how they met their fate.
All their belongings were left behind
and nothing seemed awry
It was as if they simply vanished
and none could fathom why
To this day it remains a mystery
their fate has never been learned
and the brigantine Mary Katherine
is known as the ship that never returned.
Posted by indybev at 1:09 PM